A Community Born in the Wake of Vatican II

The Community of the Beatitudes is a contemplative and missionary community founded in France in 197. Inspired by the Catholic Charismatic Renewal following the Vatican II Council, two married couples experienced an outpouring of the Holy Spirit and an intimacy with God, Gérard Croissant (Ephraïm) and his wife Jo, and Jean-Marc and Mireille Hammel. They felt called to live in community according to the Gospel, as the first Christians in the Acts of the Apostles.

As the Community grew in Cordes sur Ciel, Cardinal Robert Coffy recognized it as a “Pious Union” in 1981. In 2002, the Pontifical Council for the Laity recognized the Community as a “Private International Association of the  Faithful.” After further development, on June 29, 2011, this association was dissolved and the Archbishop of Toulouse, Robert Le Gall, set up a new Public Association of the Faithful under diocesan law, with the view of creating an Ecclesial Family of Consecrated Life under the authority of the Roman Congregation for Institutes of Consecrated Life.

An image of the People of God called to holiness

The Community, as an image of the people of God living in a communion of different gifts, gathers together consecrated sisters and brothers, some of whom are priests; as well as lay members, single and married, including permanent deacons and those who chose to make a vow of lay celibacy. All members share in the same initial calling.

As of 2019, the Community comprises 763 members: 177 brothers (87 priests), 270 sisters, 316 lay members (13 who are permanent deacons and 51 who have chosen celibacy for the Kingdom). Over forty candidates are in a year of discernment and formation, with a view of entering the Community.

The  Beatitudes Family also includes affiliated members called the Disciples of the Lamb (young adults) and Friends   of the Lamb.

The Community has founded  50 houses in 28 countries, across Europe, Africa, Asia, North and South America, the South Sea Islands, and the Middle East.

Governing Structure of the Community

The Community of the Beatitudes is composed of :

The Community is governed by a President (man or woman) elected from among its consecrated members by a General Assembly, whose delegates are elected by all the members of the Community. The President is helped in his or her work by a General Council  comprised of the Branch Heads and their assistants, working in collegiality and seeking together the will of God. They exercises their authority mindful of the autonomy of each branch. 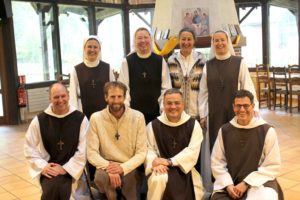 In October 2019, the Community’s General Assembly re-elected Sr. Anna Katharina Pollmeyer for four more years as the Community’s President. The Particular Assembly of each branch elected Fr. Jean-Uriel Frey as General Superior for the brothers’ branch, and Sr. Eva of Jesus Schwingenschlögel as General Superior for the sisters’ branch, and re-elected Anne-Emmanuelle Dixmérias, General Moderator for the lay branch. Each chose an assistant.

The Community is also accompanied by Br. Henry Donneaud, O.P., Apostolic Assistant nominated by the Roman Congregation for the Institutes of Consecrated Life.