The Community of the Beatitudes, an ecclesial family of consecrated life

On December 8, 2020, during the Mass of the Solemnity of the Immaculate Conception, at the community house of Blagnac, His Excellency Robert Le Gall, Archbishop of Toulouse, published the decree erecting the Community of the Beatitudes as an “Ecclesial Family of Consecrated Life” of diocesan right by the Congregation for Institutes of Consecrated Life (CIVCSVA). This new status of ecclesial approval, in the works for over ten years, signifies an important step for the Community and  for the Universal Church. This is the first time that an institute of consecrated life has been erected under this title, at the request of the Congregation for Institutes of Consecrated Life and Societies of Apostolic Life (CIVCSVA). What exactly is an Ecclesial Family of Consecrated Life? To begin with, consecrated life implies everyone who chooses celibacy for the sake of Christ and of the Gospel. It traditionally includes the following forms:   secular institutes, hermits, and religious life, be it apostolic, monastic, or missionary.

In apostolic, monastic and missionary religious life, persons are called to follow Christ, and live the Gospel; just as all the baptized faithful. Religious, however, are called to live this out  in community with other men or women (of the same gender), permanently (“public” vows), and in the manner of the founder or the foundress. There are many religious institutes (congregations, orders, monasteries, etc.). Secular institutes of consecrated life have been recognized in the Catholic Church since 1947. For example, in France, there are some thirty different secular institutes who live out their vows “in the world”, with a mission to bring the spirit of the Gospel to the world, as salt or leaven, . There are also societies of apostolic life (cf. canon 731) and the Order of consecrated virgins (cf. canon 604). Societies of apostolic life (SVA) bring together priests, brothers or sisters who often live in community and make promises or vows. These societies are defined first of all by their apostolic task–their mission–and not by their way of life.

This new type of institute of consecrated life was developed by the Holy See to respond to the desire of certain new multi-vocational communities to integrate within them an authentic form of consecrated life. Canon Law, however, did recognize consecrated life as it was lived out in some of these communities. There are two essential novelties: the  presence of both consecrated men and women, and then the gathering of different states of life: lay people (couples and celibates) and consecrated persons.

Following the year 2000, at the request of Pope John Paul II, the Dicastery for Consecrated Life outlined the definition of an “ecclesial family of consecrated life.” This denotes an institute of consecrated life that brings together clergy, consecrated members, and laity in the same canonical structure, dependent on the Congregation for Institutes of Consecrated Life and Societies of Apostolic Life (CIVCSVA). This new form called an ecclesial family has not yet been fixed in the written canon law of the Church, but the dicastery continues to guide its reality.

“The Community was founded in 1973 by couples who felt called to live together and put everything in common, like the first Christian communities. Celibates soon joined them in a radical community life and  intense life of prayer. Vocations to consecrated life and then to the priesthood  appeared without delay within this emerging community.

In 1985, Mgr Robert Coffy, Archbishop of Albi, established the Community as a Private Association of the Faithful of Diocesan Right. The community’s rapid and sustained growth led to numerous foundations throughout the world.

In 2002, the Pontifical Council for the Laity recognized the Community as a Private Association of the Faithful of Pontifical Right, ad experimentum for 5 years. At the end of this period, the president of the Pontifical Council for the Laity invited the Community to reflect on its identity and its canonical structure. He sought to help the different states of life better live out the Community’s charism while taking into account and honoring the specificities of each state of life. The following question then arose: is the Community which includes all the states of life (couples, lay celibates, consecrated brothers and sisters, priests, etc.) a reality that is “lay”  or “consecrated”?

A process of discernment began in dialogue with the Congregation for Institutes of Consecrated Life.

In 2009 this led  the Community onto the path of restructuring as an “ecclesial family of consecrated life”.

New statutes were approved, and in June 2011, the Community was established by Mgr Le Gall, Archbishop of Toulouse, as a “Public Association of the Faithful of Diocesan Right with a View to Becoming an Ecclesial Family of Consecrated Life.” The founding principles of the Beatitudes remain present, however the new statutes of the Community have changed many of its practicalities: the Community is now made up of three branches: consecrated brothers (including priests), consecrated sisters, and lay associates (married couples celibates, including permanent deacons). Each branch holds its particular General Assembly and elects its own officers, while the Common General Assembly elects the President of the larger Community, the guarantor of its unity. To learn more about the government of the Community, read here… and about the last General Assembly, here.

This stage of diocesan recognition is the normal prerequisite for future papal approval. Concretely, this recognition will not change the present life of the Community, which has been living  according to the principles of an ecclesial family for the past ten years. There is one significant change : as an Ecclesial Family falls within the framework of Institutes of Consecrated Life, the vows (of chastity, poverty and obedience) of consecrated brothers and sisters are now public vows, officially received by the Church.

Coming almost ten years after the approval of the new Statutes, this recognition is the fruit of a long road that the Community has traveled through joys and sorrows towards greater ecclesial maturity. She recognized her past mistakes, and today she gives thanks for the Love and faithfulness of God. More than ever, she wishes to continue to participate in the mission of the Church and in the New Evangelization, in the many locations where she has been established around the world. 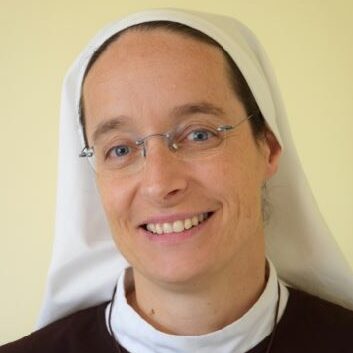 Author : Sister Laetitia of the Heart of Jesus

Having joined the Community of the Beatitudes in 1998, Sister Laetitia is currently at the General House in Blagnac, working for the General Secretariat and Communications Services of the Greater Community.